The secret science behind our eyebrow obsession

Brows have a lot of power. They distinguish one person’s face from another, serving as a sort of signature or barcode. They distinguish male from female, and these days, have played a major role in breaking down gender barriers. They are identifiers of age. And they’ve recently become a hairy canvas for makeup artists.

However, until recently, much more emphasis was put on the eyes and other parts of the face. One new study has revealed that eyebrows are highly underrated when it comes to emotion. Comparing Neanderthal and modern skulls, researchers from the University of York found that the brow ridge changed over time to make for more mobile eyebrows because they are fundamental to expression.

The study authors wanted to figure out why our ancestors had protruding brow ridges, and why that ridge flattened over time. The pronounced brow ridge was a permanent signal of dominance and aggression in our early ancestors and more common in men, like antlers on a stag. However, the shape of the forehead evolved to meet modern needs.

“While our sister species, the Neanderthals, were dying out, we were rapidly colonizing the globe and surviving in extreme environments,” the study states. “This had a lot to do with our ability to create large social networks — we know, for example, that prehistoric modern humans avoided inbreeding and went to stay with friends in distant locations during hard times.” In order to socialize successfully, they needed a more expressive face, which is where thinner eyebrows came in. A flatter forehead with movable eyebrows “allowed for the display of friendlier emotions which helped form social bonds between individuals,” according to the study.

In losing the jutting ridge, they gained greater expressivity in the face, particularly the skin over the brow bone.

Since when are brows so important in social interaction? Isn’t that what the mouth is for?

Think about it: Unless every emotion you convey is deadpan or sarcastic, you need your eyebrows to fully express what you’re feeling. What’s a pout without the raise and crunch of the inside of the eyebrows? You can’t be shocked without raising them. You definitely couldn’t scheme without the ability to raise one. And flirting would be completely out of the question. Even “puppy dog eyes” are really all about the brows.

“We’re using them all the time to get what we want,” eyebrow guru to the stars Joey Healytells Yahoo Lifestyle. “If you travel to a place and you don’t speak their language, you’d use your body language to communicate, and if you watched a video of yourself, you’d be surprised by how much you use your eyebrows to be understood by somebody who doesn’t speak the same language as you.” He adds that in silent films, the actors’ eyebrows were really thin and drawn on, based on their emotions. “When there’s no dialogue in a movie, eyebrows play a big part.”

In fact, “it has been shown that people who have had Botox, which limits eyebrow movement, are less able to empathize and identify with the emotions of others,” the researchers point out. “I came across an article once about children on Manhattan’s Upper East Side having a hard time recognizing expressions from their mothers,” Healy says, insinuating Botox is to blame.

However, the power of the brow has long been known among makeup mavens and Botox users.

Board-certified plastic surgeon Norman Rowe of Rowe Plastic Surgery talks about motion and expression with his patients. “I have patients who desire varying amounts of motion left in their brows after Botox treatment,” he says. “They tell me that they are either ‘expressive’ or talk with their hands and face. I have mothers who tell me that their children won’t listen to her if she doesn’t speak with a little scowl.”

And while Healy takes face shape and bone structure into consideration first, emotions play a part in his work too. “Sometimes I’m talking to a client and I’m making an analysis and they keep raising their right eyebrow and I notice they have these micro expressions; they’re definitely worth taking into consideration in a variety of ways,” he explains. “Sometimes there are these charming things they are doing with their brows that I want to make sure are still fully intact.”

Clients may also request an arch to look more awake and alert, he says, or a softer brow to combat a resting bitch face. “Some people say, ‘I think my brows look unapproachable.’ They are aware of the brow’s power for sure.”

This can possibly explain why eyebrows are all the rage on Instagram. Social media has given us new and endless opportunities to express ourselves, and with the rise of it came an increase in people looking for new and creative ways to share a part of themselves with the world. Whether we know it or not, we’re pretty much just obsessed with expression right now.

“I think what has happened on social media with brows reflects a very real perception on the part of people that eyebrows are important — we use them to signal our emotions,” study author Paul O’Higgins tells Yahoo Lifestyle. He is well aware of the world’s obsession with eyebrows, which is why he wanted to do this research. “I have to say that the current trends in eyebrows, and in particular my daughters’ fascination with their eyebrows and those of their friends, spurred me on to think about this,” he says.

Dermatologist Kenneth Beer feels that this research will fan the flames of our eyebrow fascination by making it more socially acceptable to have mobile brows and shape them in a manner that is consistent with current aesthetic trends. “My sense is that people are following this intuitively and using their brows to telescope to others what they are feeling,” he says. He thinks this attention is warranted. “Brows are rightly considered an art form because if one changes the brows it will signal totally different emotions. In addition, certain brows are so distinctive that people tend to mimic them.”

O’Higgins has learned through his observations (both of skulls and of his daughters) that manipulating eyebrows with makeup (sparkles, flowers, and anything else you can find) helps establish a hierarchy, just as having a brow ridge signaled power in prehistoric times. “I guess, when they are expensively done up, they signal something about status and the group to which we belong.” 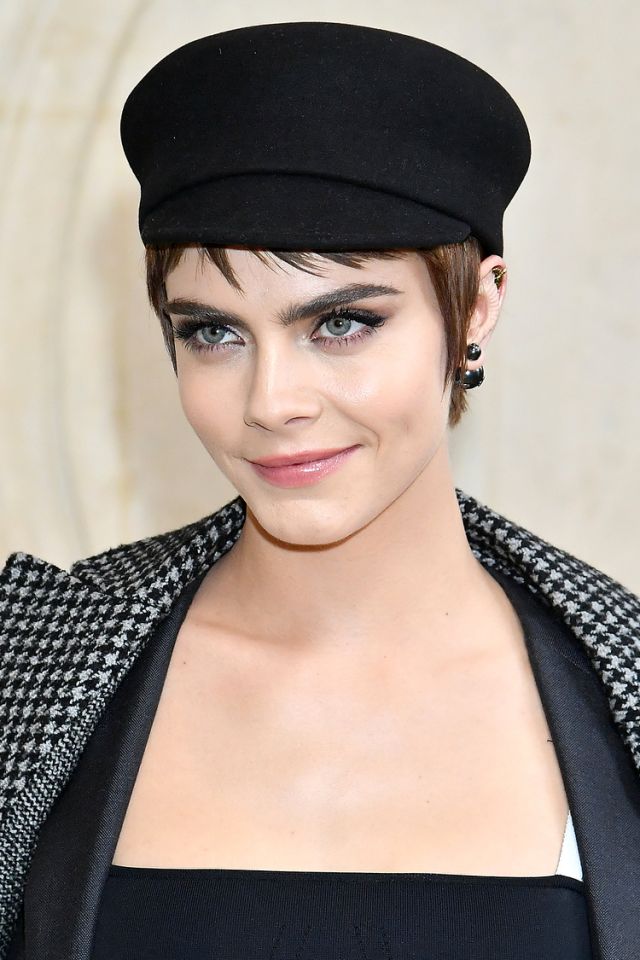 Further, Healy believes power explains why the trend is leaning toward thicker brows right now, even though that contradicts what evolution has taught us — that thinner, more mobile brows are more efficient in communication. “When you think of Cara Delevingne‘s androgynous eyebrows, there’s something compelling about that because it’s not this sweet girl, it’s a powerful brow,” he says. He references model Sophia Hadjipanteli, who is pro-unibrow. “It’s almost intimidating, but people are inspired by it.”

The same can be said for men. “I feel like with men, darker, fuller, and thicker [eyebrows] are more appealing,” says Healy. “With my own brows, I dye them really, really dark and brush them up because I want to look like I have a straighter, stronger brow ridge, because I feel like there’s something stormy, something American cowboy, about that.” He compares it to having a strong jaw. “A full, bold, lush brow shows good health in people, which is another biological signal. I think a full brow is domineering because it looks powerful and healthy.” Sound familiar?

There are ways to embrace the expressivity of your eyebrows while also embracing the thick, full trend. The key is a “full, dark, dense, thick brow,” Healy insists. “But also with a defined arch and a crisp tapered tail, because if it’s just completely wild, that’s just not expressive at all.” He says the bold brow alleviated by the arch and the crisp tail will give you full expressivity while playing into trends. If you want to make use of your expressive eyebrows, avoid round or light looks. Rowe suggests “flared at the lateral edge to give a more aggressive, in-charge appearance or raised centrally to give a more youthful, softer appearance.”

O’Higgins gets why his children are constantly scrolling through photos of fancy eyebrows. “It may seem trivial, but to many, eyebrows really do matter,” he says. “They matter to us as social creatures who need to communicate. … Our brows have evolved to help us do that.”