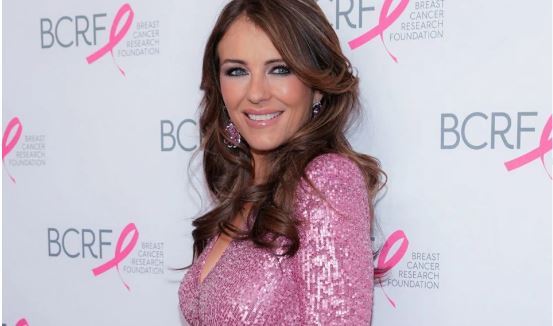 Elizabeth Hurley cut it out for her 57th birthday!

Over the weekend, the British actress shared a photo of herself in a daring pink sparkly Versace dress with all-around cut-outs held together with mini gold chains, just after celebrating her 57th birthday on Friday.

In a second snap, Hurley struck a pose with her son Damian Hurley, who donned an equally stylish Versace look of his own that featured a textured black blazer with a sleek black and gold fastener across his chest.

“Having a @versace moment ❤️❤️,” she captioned the photo, tagging Damian, Donatella Versace, and giving credit to stylist Mike Adler.

Never one to shy away from a head-turning Versace look, Elizabeth’s piece is reminiscent of her iconic safety pin dress that she first wore to the 1994 premiere of Four Weddings and a Funeral. Twenty-five years later, she recreated the look in 2019 for the April issue of Harper’s BAZAAR, proving that she’s still got it.

“I was so unprepared for what happened that night,” Elizabeth told BAZAAR of the mid-90s moment. At the time of the premiere, Elizabeth, then 28, was a little-known actress and girlfriend to the film’s star Hugh Grant, but made a splash when she hit the afterparty red carpet in the scandalous black silk Versace dress. “I urgently needed to find a dress to wear for Hugh’s premiere, and in those days I had no idea about fashion.”

Once she was was able to get a PR agency to lend her a piece, Elizabeth got herself glammed for the premiere all by herself.

“I remember going to an office where they literally fished a dress out of a white plastic bag,” she said. “I took it home and did my own hair and makeup, fighting Hugh for the mirror, which wasn’t even full-length, in our tiny one-bedroom flat. It was all very unglamorous compared to how things get done these days.”