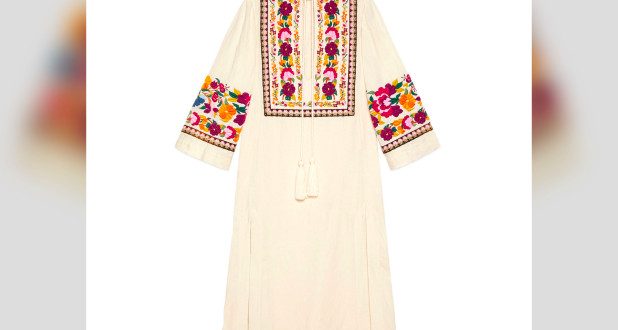 Gucci has found itself in the hot seat once again as South Asian shoppers have taken to social media to blast the brand for cultural appropriation — this time for hawking a $3,500 floral tunic that some have said look identical to $5 kurtas.

The Italian fashion house included the piece in its latest ready-to-wear collection.

“Crafted from organic linen, this kaftan is enriched with a floral embroidery and self-tile tassels,” read the original description for the item on Gucci.com, before the website was updated with a shorter version.

Gucci writes that the style first appeared in its 1996 line and is an “integral part of the House aesthetic,” as the brand has reimagined it over the years with “new materials and modern details,” according to the Independent.

Caftans have been worn in traditional dress by men and women of Asiatic cultures for thousands of years. The style was popularized globally in the middle of the past century.

Similarly, a kurta is a tunic with roots in Central and South Asia, especially India, where many are slamming Gucci for the conspicuously overpriced piece.

Gucci sweetie I will buy you this exact same kurta from Sarojini market in less than $5. https://t.co/jN7jbmFadi

“Unexpected layering with tracksuit pieces defines a whole new way to interpret the garment, giving it a surprising twist,” the designer item’s description goes on to suggest, alongside images of a fit model wearing the shin-length shirt with green track pants and sneakers.

“Gucci selling an Indian kurta for 2.5 lakhs? I’ll get the same thing for 500 bucks,” wrote one Twitter user employing Indian currency — pointing out the typical cost of a kurta is one-five-hundredth of what Gucci is charging.

Another critic suggested one better: “Gucci sweetie I will buy you this exact same kurta from Sarojini market [for] less than $5.”

“Gucci be selling this kurta for 4,550 [Canadian dollars] and I am like …. Who is shelling out that kind of $$$ for a kurta that ammi [Mom] bought me from Murree’s Mall Road for 300 rupees,” wrote Toronto-based journalist Tazeen.

The century-old brand may not be sweating this controversy, as the masses are currently tuned in to the making of the sure-to-be blockbuster biopic “House of Gucci.” Adam Driver and Lady Gaga star as Maurizio Gucci and his wife, Patrizia Reggiani, in the story of fashion royalty and homicidal tragedy.

The Gucci fam has not been quick to embrace the film, telling the Associated Press in April that they are “truly disappointed” with the film’s sensationalism and inaccuracies, according to Patrizia Gucci, a cousin of Maurizio’s (and no relation to his wife).

Among the heir’s many complaints, Patrizia said that Al Pacino is too “fat” and “short” to depict her grandfather Aldo Gucci, whom she described as tall and handsome, “like all the Guccis.” Jared Leto’s turn as her father, Paolo, is just as upsetting. “Horrible, horrible. I still feel offended,” she said.

Previous What a croc! These stilettos are here to erase all of your pandemic comforts
Next Emily Ratajkowski celebrates her birthday in $3K ‘mermaid bra’