Inside the sex-crazed final weeks at America’s elite colleges

John Avendano, Columbia College’s 2018 senior class president, received only one piece of advice from his predecessor.

“She said, ‘Your best friends are going to ask who put them down for senior scramble, and you can’t tell them,’ ” Avendano, now 23 and applying to medical school, tells The Post. “It was probably the hardest thing I had to deal with in my tenure.”

In addition to his official student council role, Avendano also ran the Senior Underground — a technically unaffiliated group that plans senior bar crawls, final banquets and the senior scramble, an annual, classwide matchmaking dating service that has students rank their top 10 college crushes in the hopes of sealing the deal before graduation.

The senior scramble — also a blanket term for end-of-senior-year hookups — is a tradition as well-known as beer pong at many elite schools. In the final days of college, students devise a bucket list of classmates with whom they want to get cozy and submit it to a governing body, such as a student-designed Web site or computer program.

As these are top students we’re talking about, they don’t merely submit their lists and move on, either. Avendano says his classmates tackled last-chance hookups with the same intensity they brought to their final exams.

“I got so many messages from people essentially insisting that there must have been a mistake or a bug in the code because they thought someone definitely put them down,” says Avendano of his stressful time as the unofficial minister of collegiate sex.

“I would see that there were a lot of matches that people thought was going to happen, and they did not. Some might say it’s juicy information.”

Columbia isn’t the only campus where near-grads are angling to enroll in inter-course. Brown, Harvard and Vassar are just a few of the top-tier universities with similar end-of-year activities.

‘This is something really exciting . . . to cap off your year.’

As first class marshal, the head of Harvard’s 2019 class committee, Catherine Zhang puts her smarts to use by meticulously planning senior week activities for her fellow classmates. That includes overseeing the creation of Match 19: the online, algorithmic matchmaking system that pairs students for the Last Chance Dance.

The system, which is designed bespoke for every class and named for their year, is coded by student programmers. It’s so well done that it inspired Justin McLeod to create the popular dating app Hinge.

“Basically, it has all the names of all the seniors, and you can type into the Web site,” Zhang says. Students are given the opportunity to select 19 names from the Cambridge, Mass., school’s 1,600 seniors.

Users can opt for a friendship match — someone they wish they got to talk to more — or a romantic one. The form is open for one week.

Similar to Tinder, students are notified of any matches. Coeds take it from there — out to coffee, maybe, or upstairs to somebody’s room.

Most students see the Last Chance Dance as “a right of passage,” says Zhang, 22. “This is something really exciting . . . to cap off your year.”

“[The Last Chance Dance] happens within a week or so that we actually graduate,” says second class marshal Anant Pai, 21. “It’s very much meant to be one of our last hurrahs.”

Unlike the actual final dance of official senior week (the much more formal Senior Soiree), the Last Chance Dance takes place at a club off campus, and is much more casual and free-spirited. Matches are always released before the dance. And while last-ditch hookups aren’t the point of the event, the two often go hand in hand.

RELATED:  Couples are having less sex than in the previous two decades, study finds 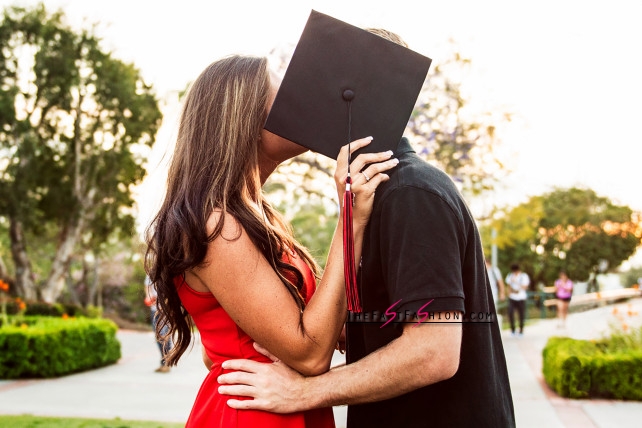 “This is a way to make sure you leave college having the chance to speak to and spend time with the people that you think you would like to,” says Chris Hinojosa, also a member of the class committee.

At Brown, matchmaking is much more amateur. Senior scramble festivities are organized by an anonymous group of students. Through a Facebook page, they invite seniors to fill out a Google Form, where they can put down the names of other seniors.

Unlike at Harvard, a match at Brown always suggests romantic interest.

“The whole point of senior scramble is that you are having some sort of relation, usually physical, with someone in the graduating undergraduate class,” says Jazmin Piche, a senior at Brown.

At the Providence, RI, school, the word “scramble” is even a slang term used throughout the year to describe hookups with a senior involved. Whether it’s seniors getting with other seniors or younger kids getting with older ones, everyone is scrambling to get busy before graduation. The unofficial matchmaking happens on school Facebook groups, dating apps and private Instagram messages.

The end-of-the-year matches are much more exclusive, and only match seniors to other seniors. Still, “it’s not pressured upon people to participate,” Piche says, and consent between parties is mentioned every step of the way.

Although she’s graduating this May, Piche doesn’t plan to squeeze in any more hookups this year.

“I’ve scrambled with everyone I’ve wanted to,” she says. “At this point I want someone who knows how to treat me well, both emotionally and physically. Because there are just some people I’ve scrambled with that do not know how to pleasure other people and just focus on themselves.”

‘I’ve scrambled with everyone I’ve wanted to.’

Piche says that most students, including herself, don’t know who’s in charge of matching or how they get that responsibility. “It’s really anonymously run,” she says. When contacted, the group declined to identify themselves.

RELATED:  Couples are having less sex than in the previous two decades, study finds

Nick Hermesman, a graduating theater major at Columbia, says he heard about his school’s senior scramble his sophomore year.

“Some people have agreements with their friends so that they match with each other; other times people put down people they’ve already had an interaction with, or someone they’re interested in,” he says.

Hermesman matched with a few people, including someone he had worked with before in the theater department, and says he was “happy with how it turned out.”

At Columbia, the process culminates with a party at Low Plaza, their equivalent of the quad, 40 days before graduation. At this year’s, Hermesman spotted “some people . . . heavily making out.”

Avendano views the tradition as a welcome respite from Columbia’s usually political atmosphere — and a chance for the coeds to loosen up.

“You don’t find people at Columbia getting excited before the big game,” he says. But “senior scramble is something everyone could get behind.”

Couples are having less sex than in the previous two decades, study finds