An overweight passenger aboard a Taiwanese airliner forced flight attendants to remove his pants so he could use the toilet — then wipe his butt as he moaned in pleasure, according to reports.

A flight attendant for EVA Air — which only employs female cabin crew — described the crappy duty the paunchy perv subjected her and two of her colleagues to aboard the LA-to-Taipei flight on Saturday, according to Focus Taiwan. 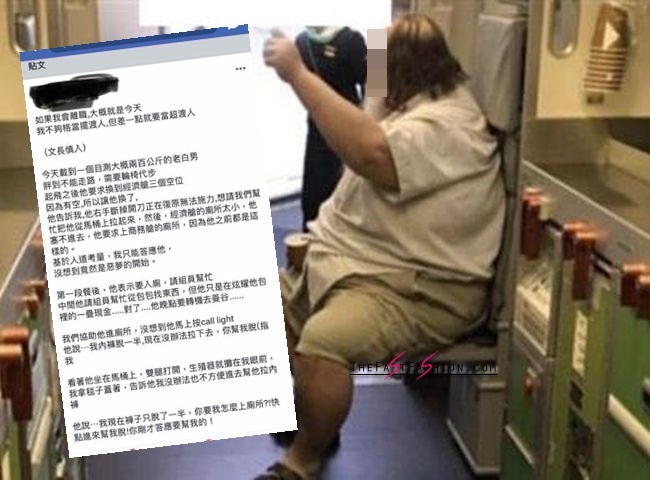 The sicko, who was confined to a wheelchair, told the flight attendants that he needed assistance to use the lavatory about two hours into the flight.

“I felt that as a flight attendant, removing a passenger’s underwear was beyond the scope of my responsibilities,” the flight attendant told a news conference, where she was accompanied by reps from the Taoyuan Flight Attendants Union.

“I told him we couldn’t help him, but he started yelling. He told me to go in there immediately and threatened to relieve himself on the floor,” she said, according to the Daily Mail. 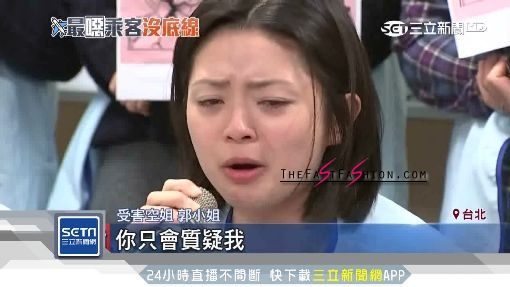 “As the passenger’s genitals were now exposed, one of my colleagues brought a blanket, which I used to cover his modesty,” she continued. “But he very angrily slapped my hand away, saying he didn’t want it and only wanted me to remove his underwear so he could use the toilet.”

The man also insisted that they keep the door open because otherwise “he couldn’t breathe.”

The women managed to keep the door closed, but the man — whose weight was estimated to be 440 pounds — then refused to leave the bathroom unless they wiped his backside after he finished with his business.

The flight attendants refused at first but then decided to carry out the disgusting task so he wouldn’t remain in the lavatory.

But things took a turn for the worse when the chief attendant donned three pairs of latex gloves and began wiping him.

“He said, ‘Oh, mmm, deeper, deeper,’ and then accused my chief attendant of not properly cleaning his backside, requesting that she do it again,” she said.

“You can pull my pants back up now,” he finally said, according to the crew member.

The union decried what it described as blatant sexual harassment and asked that EVA sue the passenger, who had defecated in his underwear during a previous flight in May 2018, Focus Taiwan reported.

The union urged the airline to establish standard operation procedures, including making sure that disabled passengers are accompanied by a caretaker.

EVA said in a statement Monday that flight attendants are allowed to refuse requests they consider inappropriate and that it is prepared to offer assistance, if needed, to sue the offensive passenger.

No, thanks.
Previous How to Keep Colored Contact Lenses Safe to Use
Next ‘Bikini Climber’ freezes to death after massive fall