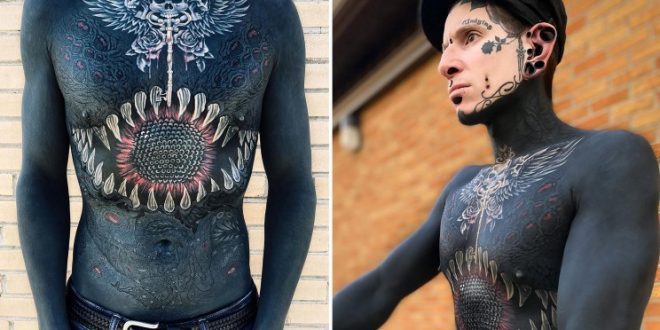 An extreme tattoo fan has spent a whopping $102,000 inking almost his entire body.

Remy, 33, from Canada, got his first facial piercing in 2001 before kicking off his tattoo journey around eight years later when he got his son’s name inked on his arm.

The chef has since splurged a fortune on his head-to-toe transformation which includes piercings and jewelry on his body.

Although he’s inked almost his entire body, there are some parts which haven’t been touched.

He told the Daily Star: “The only places I haven’t tattooed are most of my face, ears, soles of my feet and parts of my palm.”

And Remy revealed his most painful inking session.

He said: “Maybe the inside of the bum, or the deeper regions of the inner thighs, those areas are fairly sensitive.”

Although he sometimes get hateful comments on ink-covered appearance, Remy said he doesn’t care about what people think.

He said: “I never get any ‘bad’ or ‘hateful’ comments from any family or stranger in person.”

“I only ever hear those sorts of things from people online, in public I get only positive or curious comments.”

“When I receive hate online I either ignore it or wish the hater/troll well, as I’m big enough to realize what’s upset them isn’t me.”

Remy added: “I realize something else is unfulfilled or bothering them in their personal life.”

He has now shared his advice for people who want to start on their own tattoo journey.

Remy, who has more than 180,000 followers on Instagram, said: “I would say not to be in a hurry. The journey is the funnest part.”

“And if you do this as a marathon rather than a sprint you’ll have a lot better time, and make better memories.”